What Have We Lost?

Home / Featured Writer / What Have We Lost?

I had no choice other than to get it fixed. The crack in my screen was getting worse- making it arduous to read the contents in it. So, I finally decided to drop it off at the closest mobile repair shop while I finish my appointment at the dentist. It was so hard for me to part with my phone even for a few hours. (I’m sure you know that feeling).  Since I had to do a root canal and a tooth-whitening, I thought the timing would be perfect as I could collect my phone on my way back home. Reaching the dental clinic at 3 p.m. after handing over my phone to the guy at the phone shop, I realized that the Doctor had not yet arrived, and the number I was issued was 11.  I was just wondering to myself how long would that ever take. The waiting area was packed with kids, teens and adults including the elderly as well. I could hardly find an empty seat when a man suddenly stood up and walked out.  Excusing myself, I sat in between two young girls who I doubt heard my excuse as they were both obsessed with their smart phones. As a habit I put my hand into my pocket and it took only a few seconds for me to realize that I did not have my phone with me. I felt infuriated. Like at sea, I didn’t know what to do except to stare at the people around me- only to notice that almost every person there were occupied with smart devices including the nurses and little kids. This sight really made me feel awkward. I could hear the guy sitting opposite me speaking over the phone on top of his voice who I assume to be his wife or girlfriend (if it’s his wife, I guess should be newly married as his talks were so passionate and the best part was that he was on a video call maybe Skype or SOMA and he wasn’t even embarrassed to speak publicly. I was trying to start a conversation with the girl who was sitting besides me but she seemed to be so engrossed in a conversation on WhatsApp, smiling to herself as the messages kept coming like the ring of a door-bell and her fingers were wiggling vigorously. I was frustrated and turned to my left. Another teenager dressed like a million dollars was scrolling down her FB Newsfeed commenting on her friends’ pictures and liking statuses and articles. Few seats away, I could see a couple of guys continuously taking selfies and groupies with different poses.

I couldn’t keep my hands to myself. I felt like something major was missing from me, but then all of a sudden it clicked me; how addictive we have become. Our phones have replaced almost everything- from clocks to books, calculators to cameras, and MP3 players to wallets and even worse our family and friends. I then thought to myself:  ‘If I did have my phone with me right now, I would be doing the same thing- either surfing the net, watching YouTube videos, WhatsApping my friends, scrolling through my FB newsfeed or updating my Instagram. Since I was in the shoes of a girl without a phone, I could see how ugly this whole scenario actually was.

Not a single soul was even bothered to see who was sitting beside them and no one even initiated to greet one another. My gaze was also caught on a little boy who kept on badgering his mother for attention but she completely ignored him giving importance to her smart phone than her own child. I felt like dashing her phone down and asking her to attend to her son.

This has become the norm in our society. Our culture has changed. Social media has won the upper hand as it has been given preference above real life people. Our phones are the first thing we get hold of every morning and the last thing to have touched every night. Technology is allowing us to do things we have never done. It is amazing, but on the other hand, it has become highly addictive to the extent we occupy ourselves with it to the point of exhaustion.

Yes, modern technology has been invented to make our lives easier but we misuse them and waste much of our time. We as humans do need a break- to relax our mind, body and soul after a hard day of study or work but allowing social devices to take over is not a good idea.

Just give yourself a thought; The way of life now has completely changed from what it was, say; ten years ago. There is a dramatic decrease in face-to-face communication which makes it difficult to interact with others in public.

I want the government to ban the use of social media and smart devices for just one week, only to see and feel the difference. I know this is something which can never happen yet I feel people need to sacrifice their desires for the sake of unity and brotherhood of one’s family and friends.

Nowadays, every single person including the maids to drivers, farmers to waste collectors- all of them own a phone and not just a NOKIA 105 but a good model as well. Nevertheless, an exception would be my parents-in-law who are against the use of smart devices as neither of them till today has ever used a mobile and their sincere advise to this generation and after is to avoid the use of smart devices (which no one would adhere to, not even their own children) as they clearly state that this is the root cause for many problems in the world. Precisely, this could be true but during these modern times and with technology on the increase, it is extremely challenging for one to lead a life without social devices. Thus, one must try one’s level best to LIMIT the use of smart devices, giving preference to the people around us and other important activities. Furthermore, we need to be organized in such a way that we are able to finish our daily tasks on time, whereupon we can spend some time on social media without any guilt. If we follow the guidelines on the correct usage of smart devices, then what have we lost? 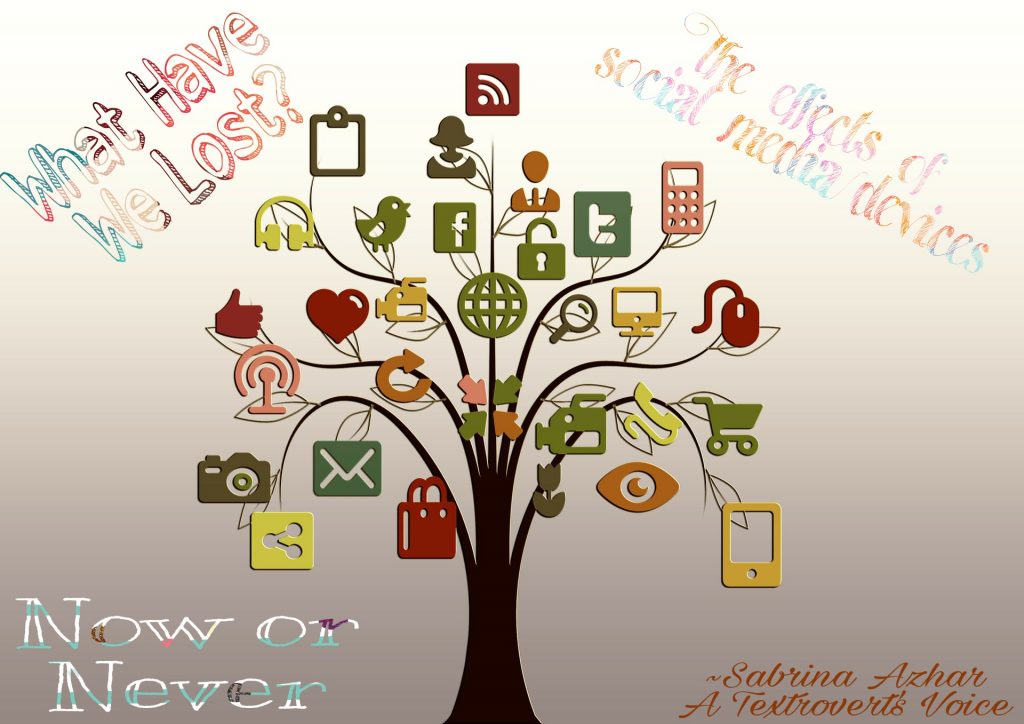 Sabrina Azhar
Alhamdulillah, being a busy mum of 3 and having completed her degree in Islamic studies and Arabic language along with an International diploma in teaching and training skills, Sabrina aspires to inspire the modern generation hoping for a better outcome Inshaa Allah! Blogging is her passion where she writes for different sites and magazines.. A Textrovert she calls herself but also is in the field of da'wah..