Why I Love Him?

Home / Featured Writer / Why I Love Him?

What is love? Dictionary states: It’s a feeling of warm personal attachment or deep affection. We would all agree to that. Whom do we love? I am not speaking about our parents or spouse. Given a choice, what kind of person do/will you love? Perhaps, it’s someone smart, intelligent, caring, stylish, strong, compassionate, jovial and much more. J Here we may all have different perspective.
Still, we develop affection for someone outside our classification! Love doesn’t always blossom where we want it to be! It grows with someone who cares for us! We cannot stop admiring one who accepts us with our flaws and brings best out of us. Sometimes a hard blow is necessary to see this. A shoulder to lean and cry is all we need. We don’t care how tall or how handsome that person is.

Can you recollect a day when you were misunderstood? Probably, you felt out of place even amidst people you had known for ages. What was the worst day of your life like? For me, it was a day in hostel. I had tried to speak in support of my sister against a popular friend. In return, I was shown how cruel, inconsiderate, unpractical and dreadful was I. It was not just her; almost everybody had something to say. I wondered why they can’t remember a single good thing I did to them. I was ashamed to have considered them so great. What followed was loneliness!  Alhamdhulillah, I’ve grown out of it and am in better relationship with the people involved.  Yet, my heart holds very special place for those who had even bothered to smile at me in those lonely days.

Amidst my loneliness, I learn about a man who cared too much for others. He wanted best for the people. He ventured into unfamiliar cities with a hope that they would listen to him. He intended no personal gain and his caption was in people’s best interest. Wouldn’t we have loved to listen to the caption? He didn’t get the desired response! He was insulted, humiliated and stoned away from a city. We can’t even stand being interrupted in our speech. And this soft-spoken gentle man who deserved to be given a VIP treatment was abused mentally and physically! What was the problem? Well, his perfect agenda conflicted with people’s personal opinions and false hopes. They preferred to be lost in their illusions than face beneficial truth. Is it hard to relate? Sounds annoying, doesn’t it?

His mission was pure and indeed he was to succeed. He had an opportunity to take revenge against these ungrateful people. What would you have done? Recollect a situation where you were wronged. Poor you facing office politics; or, as an innocent bride being cornered in in-law’s place; what did you wish? Honestly, as a teenager on my worst day, I wished with all my heart that each one of them face similar situation in their life.  Our hero could have destroyed the city. After all, they deserved it. He opts to FORGIVE them. Yes, you read it right. HE FORGAVE THE PEOPLE WHO INSULTED AND STONED HIM!!!

Why? He hoped that the descendants of those people would be wise enough to see the truth! He admits it was the worst day of his life. He had come there with great hope. Not a single soul stood by him. He was bruised and hurt. He was left bleeding in outskirts of the city with no food and water. Yet, for greater good he overlooked his pain and suffering. He was not there to show them – “Now see my wrath”. Instead he showered mercy upon them. This really astonished me. Here was me, who having argued for a personal reason was struggling to face the consequences which could hardly be called abusive. Yet, I harbored grudge. And this blessed person, with tears in his eyes, bruised, hungry and aching body prayed for the forgiveness of the ones responsible for his state. I couldn’t help but cry out of love for him. How could someone be so selfless? He considered his mission to be far greater than any pain he would ever face.  Even in worst of the situations he was patient and only uttered words in praise of the Lord! No wonder he was honored to convey the ultimate truth. For me, this was enough to prove that there couldn’t be a man better than him. He inspired me to overlook my pain. This slowly melted my malice away. I realized, I would gain no pleasure by seeing those who confronted me facing similar situation.

There is nothing great about being nice and courteous to one who is good to us. To judge our character, we should check our response in an undesirable situation. How did you react? I’m afraid,  I’ve failed many times. How wise and sensible was this kind man. Even agony and humiliation had failed to degrade him in anyway.  His refined character shined in all situations. In his life I see solution to my aching heart. With depth of my heart I wish best for him. May he always be at peace. Have you guessed who is he?.

He is none other than our beloved prophet Muhammed (صلى الله عليه و سلم). And his mission was to call people towards one true Allah. The incident I mentioned is that of Taif. 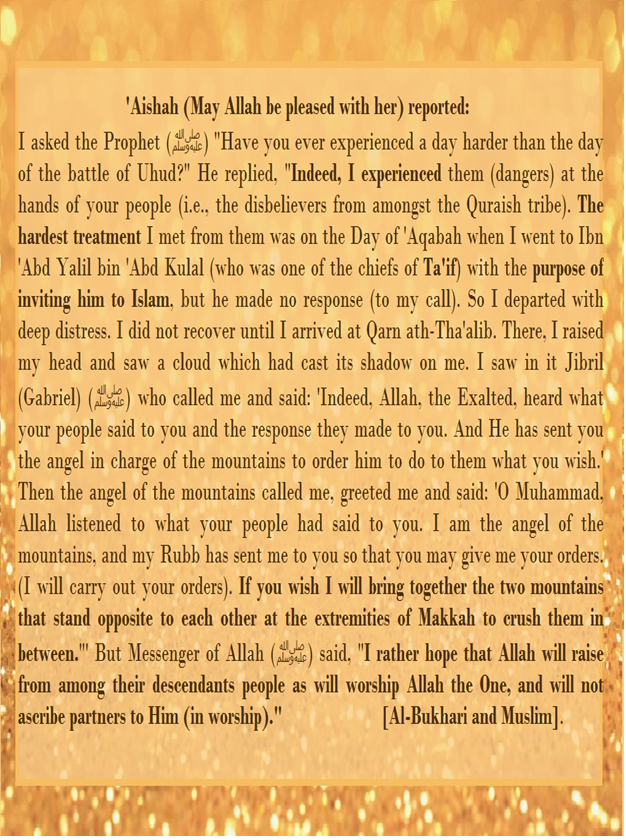 As he had hoped Taif became land of strong muslims. Alhamdhulilllah. How does Muhammed (صلى الله عليه و سلم) inspire you? Feel free to comment.

Indeed high moral caliber of prophet Muhammed (صلى الله عليه و سلم) melts and consoles many hearts. He inspires me to be a better person. Now, I was left with other regrets. Why didn’t I bother to voice out for others the way I supported my sister? I decided that I will never gang up to make someone feel low. 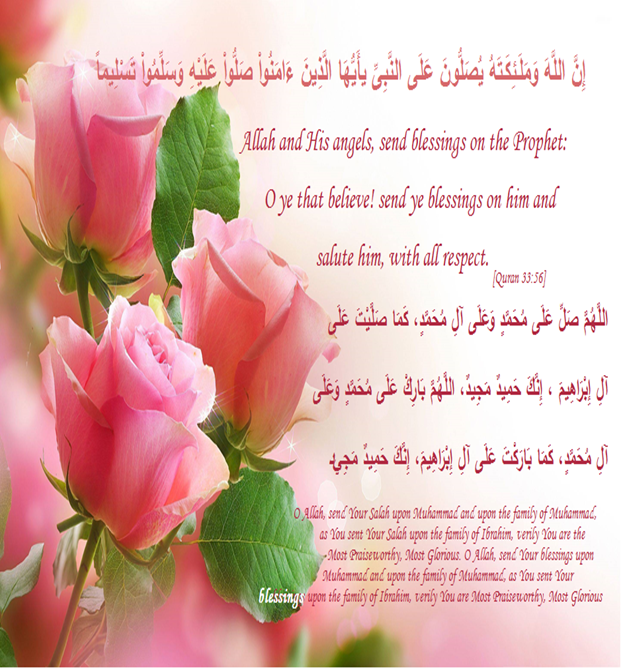