After a long spell of drought, last week clouds finally gathered and the rain washed up the Cayman Islands. The sight of gray clouds was sheer joy and clanks of pitter-patter were like music to the ears.

The whole ambiance was purified and rejuvenated by the water. The dirt vanished from the air, small puddles appeared, the grass lit up to the brightest hue of green, the breeze became fresh and fragrant, the water from the nearby pool over-flew, the chicken sought refuge beneath the palm trees which were swaying in delight and the lake – in front of our apartment- turned milky-white because of the rain. 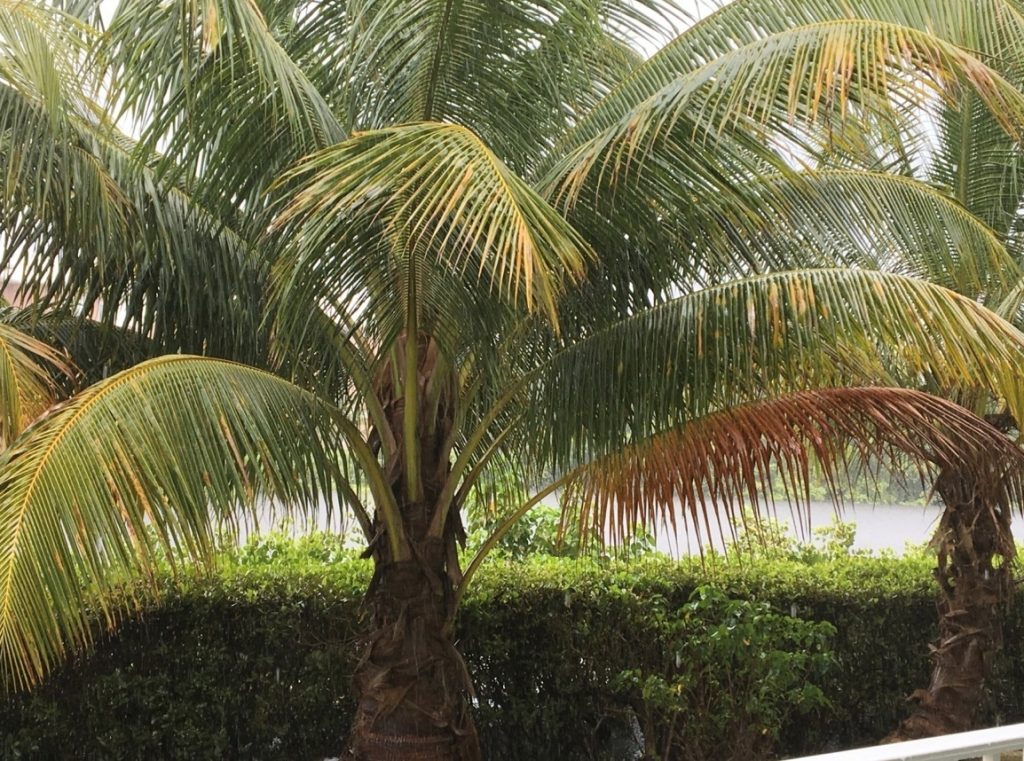 Last year the island received its record lowest rainfall in 60 years times, so this change in climate was happily welcomed by most of the people. Like Quran rightly says:

And it is He who sends down rain after [men] have lost all hope, and unfolds His grace [thereby] for He alone is [their] protector, the One to whom all praise is due. (42:28)

My toddlers quickly figured out it was raining.  They were super excited by so much water and wanted me to help them don their swimming attires as quickly as possible – lest it stopped raining.  They were thrilled at being able to jump out beneath the pouring skies, laughing, running and soaking up in the rain.

Like my kids, I have always enjoyed rains myself. The water droplets falling from the skies have always been one of my favorite phenomena. I love to celebrate and rejoice downpour by engaging myself in any creative pursuit. Cooking or crafting or writing just in the honor of rain. And if nothing else, I would gladly cherish rain while sipping my tea and silently praying. Interestingly, both prayer and rain have a very tranquil effect on our hearts. And we are also encouraged to pray at times of rain.

Narrated Sahel Ibn Sa’ad (RA): that the Messenger of Allah (SAW) said: ‘Two will not be rejected, Supplication when the Adhan (call of prayer) is being called, and at the time of the rain’. [Al-Hakim 2: 114, and Abu Dawud #2540, ibn Majah]

The Quran also compares itself, i.e. the revelation to rain. Because like rain gives back life to the dead land the Quran gives back life to dead hearts. Also, Quran repeatedly calls rain a blessing. I have been awed by it. and This became my second vindication for loving rainfall.

We, Human beings, have an innate affinity for water, probably because it constitutes around 70% of total mass of our bodies. The sight of water is serene to our eyes, the sound of water is calming to our heart and soaking up in water is therapeutic.

No wonder why we have the picturesque description of lakes and waterfalls in Quran as a promised gift to those who shall make it to Jannah (May Allah SWT make us among them) and no wonder why the waterfront properties are most expensive properties on planet earth.

Water is an amazing substance with various attributes, the one that specifically fascinates me is its ability to clean. Water is a universal solvent and a cleaning agent.  There is no comparison between cleaning a floor with a mere broom/sweep and cleaning it by washing with water. Water just takes away all the filth and dirt and it cleans and purifies everything like nothing else.

This particular quality had me thinking that shaitan is a filthy creature, and we are taught to perform ablution (like literally washing away the filth) when angry (i.e. being inflicted with shaitan) because it helps.  Water has  spiritual benefits too it even strengthens one’s soul against the plot of shaitan.

“Anger comes from the devil, the devil was created of fire, and fire is extinguished only with water; so when one of you becomes angry, he should perform ablution.” [Abu Daud; Book 41, No. 4766]

Similarly, drinking water flushes away harmful toxins from our body and detoxify it. In short water cleans the inside of our bodies as well. And let’s be honest, there is nothing as quenching as water when you are thirsty.

In Prophetic tradition, water is also used as a remedy to cure Fever  (by drinking or taking bath).

(Recorded by Al-Bukhari, Muslim, and others)

So while the clouds were clasping and droplets were tumbling down, I and my highly charged kids stepped out to splash water and cherish the blessing.

I also took this opportunity to recite my favorite Rain duas and introduce my toddlers to it.

Couple of minutes later there was a loud roar of thunder, it scared both of my kids like crazy, they ran to me crying. I sat down, hugged both of them, comforted them and told them that clouds hug too. And when they hug each other tightly it’s the sound they make.  And in the meantime, like all the creatures, they praise & remember Allah too. Therefore, we recite the dua: (From Malik Mouta)

The kids soon forgot about the thunder and resumed their messy play, somewhere amidst the running and jumping and filling and pouring cups after cups one of my toddlers started to sing the famous rain rhyme, ‘rain rain go away come again another day….’

I have heard it so many times but that moment was made of light for me. I realized this rhyme reinforces a very wrong concept in children, it makes them look at rain as something obstructive to joy. Something they want to wish away, something they do not want to relate to.

So we re-word the song and made our own version of it:

lets all have a rainy day!

And we continued to run around singing our song and thanking Allah SWT for an amazing day.

Follow Me
Asbah Alaena
A muslim by birth and choice, accountant by way of studies, an artist at heart, house wife by profession and a blogger mom to two toddlers.

Follow Me
Latest posts by Asbah Alaena (see all)

Ramadan and Eid Crafts and Resources