Weaning a baby – specially if you have nursed the child up to 2 years; by the time she is capable of determining her WANTS, can be difficult. But following these steps can surely help reduce the pressure:

Intention & dua: Since you nursed a child probably because Allah SWT wants you to do so, make the intention that you will wean around 24 months as Allah swt advised is best for them. And then make dua that it be easy for you. And insha Allah it will be.

Plan ahead Weaning hardly happens overnight, sometimes it takes way longer. Both of my kids took around 2 months till they were completely weaned off. It started by the time they were 21m old and ended somewhere when they were 23m. So yes, plan ahead.

Discuss with the child: It is always better to include the child in the process. Explain it to her that she needs to wean off because she is growing up and weaning is the sign/milestone of ‘Being a grown up’. (Toddlers are often obsessed with the idea of growing up so hopefully it will be enough motivation for them to wean).

Conversation about the process will allow her logic to kick in and she will feel more in control of the situation (because she now knows ‘why’), and hopefully it will result in easy weaning. Sometimes the child grasps the concept so well that she can self-wean without hassle.

Start Replacing BF with other milks It is easier to wean smaller babies and seamlessly shift them to feeders. For toddlers, the solution lies in supplementing them with various kinds/flavours of milk along with their regular food at least 2/3 months before you plan weaning. And gradually increase their intake of regular milk while simultaneously reducing nursing untill the baby is only nursing at nights.

Make the whole process slow Gently limit nursing. In the beginning follow the “Don’t offer Don’t refuse” rule by only nursing when the baby demands it. Toddlers are usually so busy during the day they forget to ask for it and slowly, even when they demand during the day give any alternative milk/snack and tell them that they can only nurse at bed time.

Tire the baby and feed them to their full at night Toddlers get really fussy if they are being denied nursing specially at the night time. The trick I used while weaning both my kids was to tire them throughout the day (by adding more physical exercises) then fed them to their full and allowed them to have regular milk as well, gave them a warm bath and an oil massage! So by the time we would lay down they would fall asleep in seconds, or just fall asleep on their own while I was massaging their legs. Sometimes I would hold them in my arms rocking them to sleep to avoid nursing at night. And soon they learnt that they can sleep WITHOUT being nursed and were less fussy.

Make it gross Sometimes nothing seems to work and the child is so cranky and frustrated at not being nursed, making the experience a ‘gross’ one can often help a child in self-weaning. Like wrapping a strand of hair on the nipple, or applying a nasty tasting something, while allowing her to latch, explaining beforehand that it would not be a good experience. The results may be an angry child, frustrated by the ‘hair’/nasty-taste but she will probably be disgusted by it at the same time and it can lead to complete weaning.

Nursing is almost like a relationship of its own where babies see themselves as literally attached to their moms and therefore they identify the bodies of their mothers as an extended part of their ownselves.

So, weaning a baby is like telling them that they don’t possess their moms anymore. And It’s a big big problem for them. And they also don’t know how exactly to communicate this to us, so get ready for a lot of crying, whining, screaming and tantrums. Phew. Perhaps even fever and nausea, which is also a child’s way of telling that he/she is upset.

Because babies not only nurse for food, they also nurse for:

So even if they have a supplement food (or milk) they still feel the separation anxiety when told to wean off. What you can do is:

Once you UNDERSTAND the reason behind the clinginess, (which is weaning) you just Expect the child to be more clingy/demanding, and you see it as a way of showing discomfort and be able to respond with empathy.

Written reminders benefit a lot. Write it on a paper and paste it where you can see: “My baby will be cranky because we are weaning, He/she needs a lot of my love to be assured and secure again. I will provide it to him/her”.

To avoid tantrums, keep the baby distracted, When I was weaning we used to do a lot of crafts and play alot out just to keep them busy and occupied with the task at hand so they don’t have time or energy to burst out crying.

This is tough part – specially when you are dead tired and don’t want to deal with a cranky child. But be kind. This is the time your child need your kindness the most.

Give them a lot of hugs and kisses and attention

Lastly but most importantly, they need to be physically close to you, don’t deny them that! Don’t push them away because it will increase the insecurity in them – instead offer to hug more, kiss more, cuddle more!

Sit and allow them to sit on your lap while you read a book to them of just simply listen to their wayward tales.

Engage and Involve them in your daily chores, allowing them more time they can spend WITH YOU! This way you are securing them. Comforting them and the whining will insha Allah be over very soon 😊 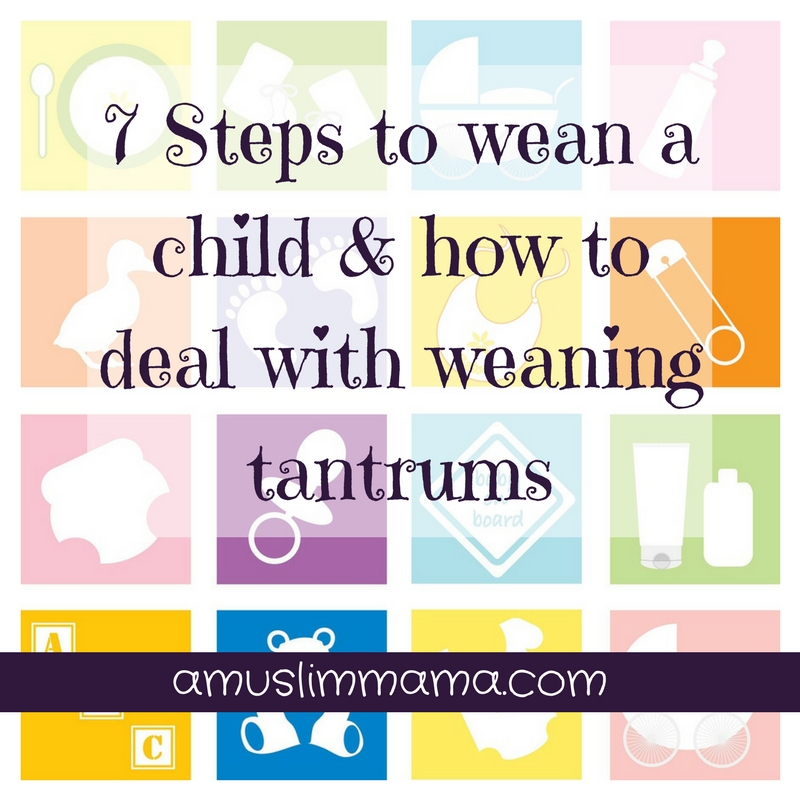 Follow Me
Asbah Alaena
A muslim by birth and choice, accountant by way of studies, an artist at heart, house wife by profession and a blogger mom to two toddlers.

Follow Me
Latest posts by Asbah Alaena (see all)