As  Ramadan is just about to unfold all its blessings and advantages, more and more women with intimate issues like irregular cycles/ bleeding, pregnancy, painful periods, breastfeeding and fasting are surrounded by a series of doubts. Most commonly they are perplexed about their fast and any loss in the indulgence of the spiritual awakening in the holy month of RAMADAN due to the cycle disturbances and irregular bleeding.

As a physician, the most debated questions put by the women are:

Older women are mostly concerned about any episodes of spotting/ bleeding which may happen in Ramadan.

But the most awestruck are the young women having a MISSED PERIOD or an episode of IRREGULAR BLEEDING and assuming themselves to be pregnant.

What quantifies a physician’s role is the fact that these women also want to know the ISLAMIC RULINGS about the issue at first hand.

Recently, a newlywed girl with delayed periods came up for the confirmation of pregnancy and left with a heavy heart when she was told that her period irregularity is not because of conception but something else.

As mentioned above, most of the women insist on having the valid Islamic Rulings regarding their FAST and PERIOD IRREGULARITIES. As I am not an Islamic Scholar, I used to guide them to the Islamic JURISPRUDENCE sites for their issues. What I ensure them is the fact that SHARIAH rulings are built on consideration of differences between Individuals, Kindness and Gentleness. (Allah knows the Best) 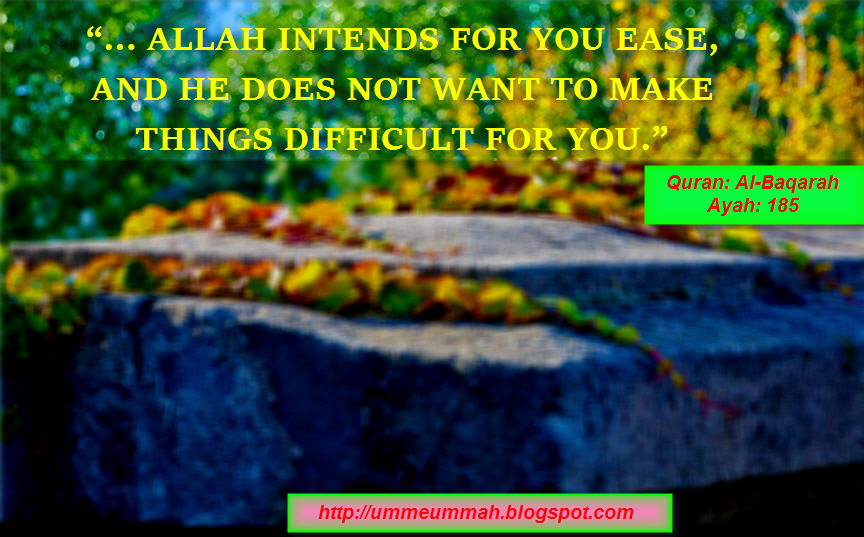 According to By Sh. Muhammad al-Hassan Wali al-Dido al-Shanqiti women are presented with a number of issues that meet the requirements of hardships like pregnancy, nursing, menstruation and irregular vaginal blood flow and it influences the ruling related to purity, prayer and fasting…..you can read more here. (Allah knows the Best)

We are all aware of the fact that the most common cause of MISSED PERIOD is PREGNANCY but also many of the causes of missed period could be due to any pathology other than pregnancy leading to IRREGULARITY in periods. It is a common complaint among women significantly affecting their quality of life.

According to the report published in the Journal of Clinical Endocrinology and Metabolism, missed periods over an extended period of time (Amenorrhea), is a relatively common condition that is present in up to 5% of adult women at any time.

Approximately every month, there is bleeding from the vagina when the lining of the womb sloughs off if the egg released from the ovary is not met with the sperm (the male unit of fertility). This is called as MENSTRUAL PERIOD or period.

There are certain important things to be known about the period.

It is the number of days from one cycle to another counted from the first day of bleeding. Any length from 21 to 35 days are considered normal.

Classically, it is about 20 to 60 ml(as written in the textbooks), but this measure is of no value for the household women; so practically it is something about 3 to 4 pads soaked per day. Remember not oversoaked.

The blood is usually bright red to light red in color.

But what is important is that the parameters for regular periods written above do not fit for all females. Rather, every woman should make a note of their own cycle, its length, flow every month and anything considered aberrant from this is taken as abnormal for that women.

For a regular cycle, experts usually take the length of the cycle alone as the parameter for the regularity. Accordingly the cycle is said to be regular if it falls on the same date only with the variation of 1-3 days. So if somebody is experiencing vaginal bleeding apart from the expected periods than it may be due to some abnormality. After excluding pregnancy and menopause, there are no other normal happening which causes the periods to be irregular, missed or delayed.

The normal menstrual cycle is governed by the levels of sex hormones which are under the control of the brain, ovaries, thyroid and other glands. Any factor disturbing the state of hormonal health will have an effect on the menstrual cycle, causing bleeding between the periods, before the periods and after the periods. 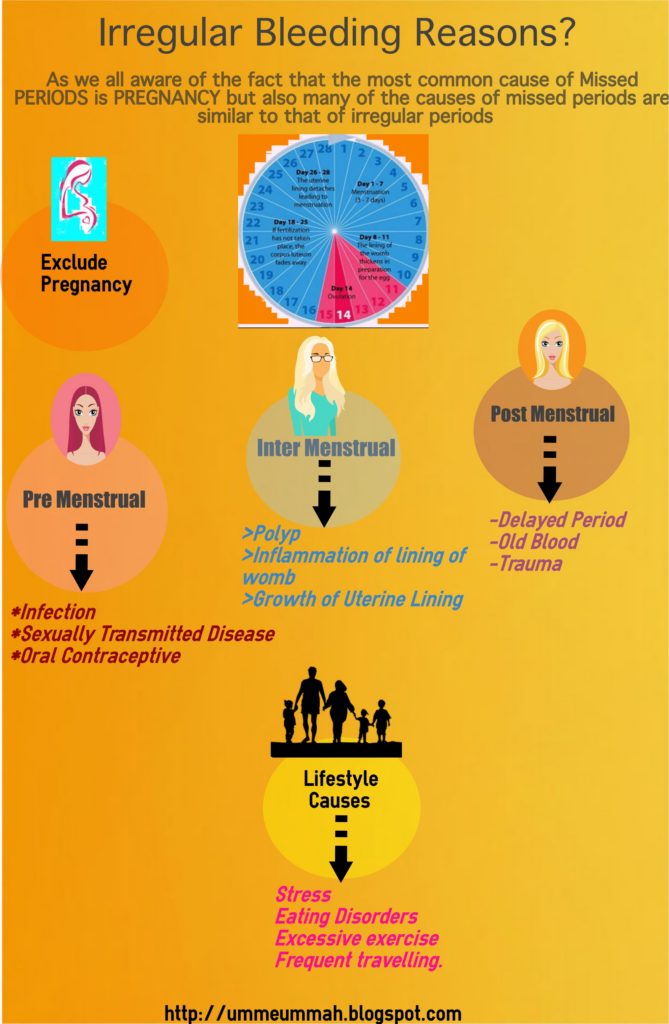 Any bleeding that occurs for one or more days before the recognized menstrual periods on the regular basis.

Polyp (small fleshy lumps that occur at the neck of the womb or in the cavity).

Any infection or growth in the lining of the womb.

Due to certain medicines. (contraceptives,anticoagulants,antidepressants) etc

Spotting that occurs after the menses due to:

Other lifestyle causes that are responsible for the missed periods/irregular bleeding are:

Besides the symptoms of the underlying disease, the heartache and inconvenience that is caused by irregular episodes of bleeding are grave. The embarrassment that follows due to the unpredictability of the bleeding requires intense hygienic measures and doubling of the protection to prevent any leaky episode.

The delay in the cycle due to the reasons other than the pregnancy bring disappointment to the couples who have taken their missed period as a sign of pregnancy making them heart broken. Having a regular painless or moderately painful period is the hallmark of balanced hormonal and reproductive system. But most irregular periods are not at all dangerous and can be easily controlled. The best option is to visit your gynecologist if the issue persists.

The decision to fast or not to fast depends on individual history and the risk factors affecting the females but make sure that Ramadan is not only about FASTING but also about purification of your soul. Make this Ramadan the turning point of your life for success in both lives.

Myda Tahir
Dr. Myda Tahir, being a physician blogger, health and fitness are my primary concerns. Trying to achieve the maximum level of fitness (only my close ones know my tummy size) is my ultimate passion and having a walk with my family is my all time favorite. Well, my ultimate vision of life is to be Nafah (benefit) to others which are also evident in my writings, educating and raising awareness among masses.
My only wish is to die (sounds scary?) as Satisfied and Happy  Muslimah(obviously in Medina).

5 Tips to Manage Your Career and Faith During Ramadan