Allah (swt) says in the Qur’an:

“And there is no creature on earth but that upon Allah is its provision [rizq], and He knows its place of dwelling and place of storage. All is in a clear register.” (Qur’an, 11:6)

When a child is born, Allah blesses the child with the very first meal effortlessly. Right from the days when women gave birth in deserts, there was no apprehension about what the baby would feed on. Allah has created enough food and drink for the child for months in the mother’s bosoms.

“Mothers shall suckle their children for two full years, – that for such as desire to complete the suckling.”

SubhanAllah. It is the right of a child to be breastfed.

And the wisdom of Allah in creating the perfect nourishment of the child in his mother’s milk has been proven through scientific and medical research with time.

In an age where everything is questioned & analyzed, ideas are ripped apart and put together, we see the benefits of breastfeeding, for the child being fed as well as the mother, everywhere, from billboards to pamphlets. Islam has encouraged breastfeeding as long as 1400 years ago. The WHO has only recently brought about breastfeeding a major component of the Global Nutrition Target 2025. Published in 2014, it states,

“Exclusive breastfeeding – defined as the practice of only giving an infant breast-milk for the first 6 months of life (no other food or water) – has the single largest potential impact on child mortality of any preventive intervention. It is part of optimal breastfeeding practices, which also include initiation within one hour of life and continued breastfeeding for up to 2 years of age or beyond.

Exclusive breastfeeding is a cornerstone of child survival and child health because it provides essential, irreplaceable nutrition for a child’s growth and development. It serves as a child’s first immunization – providing protection from respiratory infections, diarrheal disease, and other potentially life-threatening ailments. Exclusive breastfeeding also has a protective effect against obesity and certain non-communicable diseases later in life.”

Some of the incomparable Advantages Of Breastfeeding, that we probably know yet often, take for granted are:

Allah has made breastfeeding moms of benefit, so much so that the father is enjoined to spend on the breastfeeding mother. Which other culture encourages this? And they say women in Islam are oppressed!

Some Rewards In Islam For for Pregnancy and Breastfeeding’ that have been recorded via various narrations are:

Raashid ibn Hubaysh narrated that the Messenger of Allaah (peace and blessings of Allaah be upon him) entered upon ‘Ubaadah ibn al-Saamit when he was sick and said, “Do you know who is a shaheed (martyr) in my ummah?” The people remained silent, then ‘Ubaadah said, “Help me to sit up.” They helped him to sit up, then he said, “O Messenger of Allaah, (is it) the patient one who seeks reward from Allaah for his patience?” The Messenger of Allaah (peace and blessings of Allaah be upon him) said, “Then the martyrs among my ummah would be very few. Being killed for the sake of Allaah is martyrdom, the plague is martyrdom, drowning is martyrdom, stomach disease is martyrdom, and if a woman dies during the post-partum period, her child will drag her to Paradise by his umbilical cord.”
There is no doubt that a woman’s pregnancy and giving birth is fulfilling an aim of sharee‘ah that is dear to Allah, which is increasing the progeny of the Muslims who proclaim the Oneness of Allah, the followers of the Prophet (blessings and peace of Allah be upon him). The reward that goes into taking responsibility for bringing up a sound Muslim would be undoubtedly worth trials!
It was narrated that ‘Aa’ishah (may Allaah be pleased with her), the wife of the Prophet (peace and blessings of Allaah be upon him), said: The Messenger of Allaah (peace and blessings of Allaah be upon him) said: “There is no calamity that befalls a Muslim but Allaah expiates (sin) thereby, even a thorn that pricks him.” Narrated by al-Bukhaari, 5640; Muslim, 2572.
The difficulties encountered by the pregnant and breastfeeding woman, including pain and sickness, and health, psychological and physical problems in many cases, will all bring great reward that will be recorded for the women, in sha Allah. Allah will reward the Muslim for everything that befalls him in this world. Even if a thorn pricks him, Allah will expiate thereby some of his sins, and the pains of labour and pregnancy are far greater than that.

Breastfeeding is bittersweet. After the initial cracked sore nipples and never ending late hours of feeding on the couch, while doing chores and trying to get into comfy position to sleep, you only try to think of the rewards promised and always wonder with awe what you have done to deserve those big beautiful eyes staring at you with wonder as you nurse and nurture the tiny human.

May Allah bless every woman with this beautiful journey and accept our deeds and reward us!

There has been a lot of speculation, guesses and contradictions to what’s the ruling on concessions to breastfeeding mothers with regards to fasting. The widely uinderstood and accepted practice is, that, as long as fasting doesn’t affect the fetus of a pregnant muslimah or the infant of a breastfeeding muslimah, one must continue to keep fast. In case the mother worries genuinely for her child, in either case, then it isn’t permitted for her to keep fasts, and she must make up for the missed fasts once she is able.

When questioned by muslims to islamqa regarding this, their response, I quote, below:

Shaykh Ibn ‘Uthaymeen (may Allaah have mercy on him) was asked in Fataawa al-Siyaam (p. 161):

If a pregnant woman or breastfeeding mother does not fast with no excuse, and she is strong and in good health, and is not affected by fasting, what is the ruling on that?

It is not permissible for a pregnant woman or breastfeeding woman not to fast during the day in Ramadaan unless they have an excuse. If they do not fast because they have an excuse, then they have to make up the missed fasts, because Allaah says concerning one who is sick (interpretation of the meaning):

“and whoever is ill or on a journey, the same number [of days which one did not observe Sawm (fasts) must be made up] from other days”

Pregnant women and breastfeeding mothers come under the same heading as those who are sick.”

What to Watch Out For When Fasting While Breastfeeding

The most important thing is to avoid dehydration. You may have to skip fasts to make up for later if you experience one or more of these signs of dehydration:

Although these are felt by most people owing to the scorching heat in Ramadan at least for the first few days, be aware of how your body is recovering after the initial days and if you are getting used to the fasting routine.

While the belief is that a breastfeeding mom required 1 800+ calories a day, many women can produce sufficient milk with as little as 1400 calories a day. In fact, hydration is more important than food while breastfeeding. Hence, do not skip that extra glass of water. Just drinking water before every feed can help with the milk flow.

A question that arises often in moms of newborns, especially those that comfort nurse or cluster feed is this- How do I know the baby is getting enough milk?

Here are some signs to watch out for:

It is a widespread idea that all moms can breastfeed. Unfortunately, there’s a less known/ accepted side to the breastfeeding world. 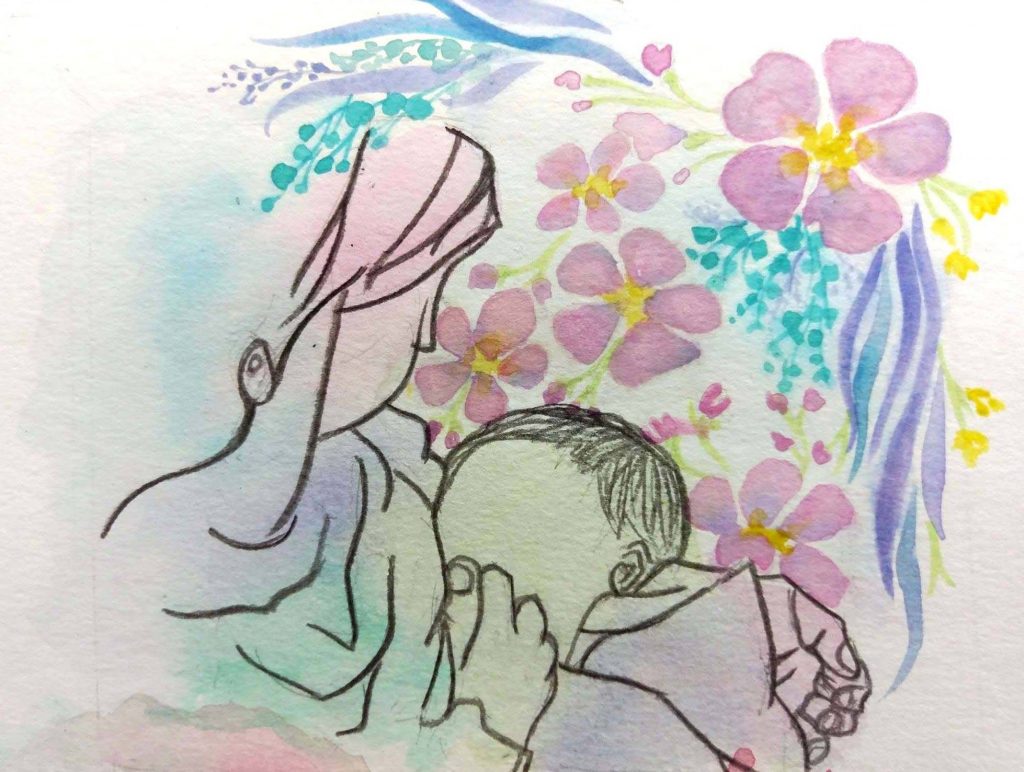 When A Mother Is Unable To Breastfeed

Igt is an issue that affects thousands of women around the world, possibly millions, but there isn’t enough information that doctors provide to women struggling with milk supply, and there still are lactation consultants who are oblivious to this problem. IGT stands for Insufficient Glandular Tissue, and basically means a woman’s breasts didn’t develop optimally during puberty. It is only ONE of the many reasons why many women are unable to breastfeed.

Other reasons that a mom is genuinely unable to breastfeed could be found here.

Women who envisioned and looked forward to a successful breastfeeding journey could be in denial and refuse to accept that she is unable to produce enough for the newborn. A clear indication of this is when the baby doesn’t pass the meconium ( sticky stool) within the first few days of birth & also, doesn’t reach back to the birth weight within a week ( after losing the water weight initially, immediately after birth). There are reports of babies that have failed to thrive and have undergone serious health problems due to not being nourished enough. This happens as a new mom is unable to decide if or not the baby is receiving milk when the baby is mostly suckling, often for comfort, and falls asleep on the breast.

What are the symptoms or markers?

While small breasts are not a marker of IGT, it is the shape and placement that matters. Tubular shaped breasts, and or wider than 1.5 inches apart, is an indication. Most women with IGT tend to notice little to no changes in their breasts during pregnancy & postpartum.

I can’t seem to make peace with the fact that I can’t exclusively breastfeed. What can I do?

“Certainly, Allah does not look at your shapes or wealth. But He only looks at your heart and deeds.” [Bukhari and Muslim]

While the baby may not have been fed breastmilk entirely, what matters is that you had the intention to do the best for you child, and to give the baby her right.

“He who seriously considered doing a good deed but did not do it, will have one good deed recorded for him.” [Muslim]

A woman, thus, should not doubt over whether she will be losing out on the rewards of a breastfeeding mom due to no fault of her own.

While the information about IGT and breastmilk supply issues is more widespread than in the last couple of years, the victims, or rather warriors that go through the disappointment, that often leads to guilt and depression of not being able to provide what their body is supposed to naturally, can be devastating. It doesn’t help any bit, when she is questioned, suggested, or ‘helped’ with totkas, home remedies, and judgmental scorns when feeding formula. The sad part is that women around the world still don’t believe less supply is a ‘thing’, & nothing more than an excuse.

Do you know someone who struggles with their breastfeeding journey?

The Messenger of Allah ﷺ said, “Kind speech and feeding (the hungry) guarantee you Paradise.” (al-Tabarani)

When you meet a woman struggling, kindly provide support. remind her that she is amazing the way she is. Feeding by bottle, an SNS, or breastfeeding, a mom isn’t rated better than the other.

“Purify your work, knowledge, anger, acceptance, refusal, speech and silence for the sake of Allah.”

Haifa Thajudeen is an interior designer by profession, graphic designer by choice, & mother of two boys. Founder of a tiny establishment called Paper, Batter, Banter; her passions include print design of sorts & creating custom/ commissioned watercolor pieces of art. She aims to contribute to the Muslim community and reap rewards for the Aakhirah through her artistic expressions.

Ramadan Day 15: My First Ramadan as a Revert: Memories and Reflections