Fear, Grief and Patience in the Quran

Home / Featured Writer / Fear, Grief and Patience in the Quran

Verily, on the friends of Allah there is no fear, nor shall they grieve. Al Yunus:62

Fear and grief are a great reality of the world we live in. So much so, that they cannot be disentangled from the idea of life itself. Wherever there is life, there will be fear and there will be grief. This notion holds true especially if we look around us in today’s world and see the heart wrenching levels of suffering that surrounds us. Most of us read or saw the news this morning. How many human beings were killed, injured or maimed, physically or psychologically through hunger, famine, or acts of terror or violence. All this human suffering undoubtedly strengthens the notion that life is just full of grief and fear, and pain and suffering are inevitable and unavoidable realities of life.

Fear is not only the basis of physical suffering in this world, but an underlying cause or result of a variety of different psychological disorders. Due to this reason, psychology has addressed the notion and idea of fear extensively. Fear, in Psychology, can mean anything from physiological and emotional arousal in the face of real danger to an unplaced feeling of dread due to perceived or impending danger on the part of the individual – which often manifests in the form of different anxiety disorders or Phobias.

If we study human behaviour, reactions, and psychological illnesses closely we will find fear to be the underlying, root cause of all negativity. As individuals, we are afraid of loss, public opinion, what the others might think or say and of not being able to perform our roles up to the standards set by society. All of which may ultimately lead to clinical depression or anxiety, or in other words, sorrow. On collective levels, foreign policies are almost entirely based on fear.

Fear and Grief in the Quran

The concept of fear and grief is mentioned extensively in the Quran:

And we will surely test you with something of fear and hunger and a loss of wealth and life and fruits, but give good tidings to the patient, who when disaster strikes them, say, “Indeed we belong to Allah, and indeed to Him we will return. Al Baqarah: 155, 156

The believers are informed that they will be tested. That this world is a place where, along with happiness, peace and tranquillity are the states of fear, grief and sadness. Yet, along with the indication of these states of fear and grief, the Quran also repeatedly mentions the souls who “shall have no fear, nor shall they grieve.” This state is essentially mentioned in the context of the Day of Judgement, but we can also find its implications in Dunia, in various situations of life when faith proves invaluable.

Who is free from fear and grief?

Who exactly are the people for whom this state of emancipation from fear and grief is promised? What are their qualities and traits? The Quran sheds light in numerous places on the attributes of such individuals:

Indeed: everyone who surrenders his whole being unto Allah, and is a doer of good withal, shall have his reward with his Sustainer; and all such need have no fear, and neither shall they grieve. – Al Baqarah:112

Those who spend their possessions [for the sake of Allah] by night and by day, secretly and openly, shall have their reward with their Sustainer; and no fear need they have, and neither shall they grieve. – Al Baqarah:274

Verily, those who have attained to faith and do good works, and are constant in prayer, and dispense charity – they shall have their reward with their Sustainer, and no fear need they have, and neither shall they grieve. – Al Baqarah:277

But Allah will safeguard all who were conscious of Him, [and will grant them happiness] by virtue of their [inner] triumphs; no evil shall ever touch them, and neither shall they grieve. – Az-Zumar:61

For, behold, all who say, “Our Sustainer is Allah”, and thereafter stand firm [in their faith] – no fear need they have, and neither shall they grieve: – Al Ahqaf:13

The above verses bring to light some clear and definitive traits of the people for whom emancipation from fear and grief is promised. They are believers in Allah and the Day of Judgement, do good deeds on the basis of their faith and are very generous in dispensing charity. They also stand firm in their belief that Allah is the Ultimate Sustainer.

Tawakkal as a Remedy

An individual who fears only Allah and considers Him to be the Ultimate Sustainer without Whose command nothing and no one can harm them, has nothing to fear in this material world. While, on the other hand, a person having weak or no faith will be afraid of numerous entities. They will be engulfed by fear of the future and anxiety about countless things, small or big, over which they have no control. When an individual puts his or her entire faith and trust in Allah, a concept known as Tawakkal in Islam, then, first of all, their heart remains free from fear. Secondly, any calamity or adversity that strikes is then taken as a test from Allah and is borne with patience and fortitude.

O you who have believed, seek help through patience and prayer. Indeed Allah is with the patient. Al Baqarah: 153

Here Allah has prescribed a remedy. A therapy for the treatment of fear, grief, and sadness which is the natural result of any pain or adversity that an individual has to experience in this world, as foretold by Allah Himself in the Quran. Patience not only aids in dealing with adversity, but also results in psychological soundness on the part of the individual.

Becoming a Friend of Allah

Psychologically speaking, most of our anxieties, phobias and depression arise from a fear of the future. A free floating anxiety related to upcoming calamities or dangers which might rock our otherwise peaceful lives. If a person has complete faith in Allah, then fear and grief cannot touch them, or at least affect them the way it would affect someone without faith. Thus, the person would be free from most psychological disorders and depression in this world. The basis of psychological disorders is in fact fear of the Unknown. But, if an individual believes wholeheartedly that none but Allah can harm us, then that person finds no occasion to feel anxious or depressed. They are physically and psychologically strong, and the foundations of this strength lie in their faith in God. The belief that only by God’s command can something cause benefit or harm.

The people with such a level of faith have been called “friends of Allah” in the Quran. Indeed those who have this level of faith are fortunate enough to be blessed with this title. A reward Allah bestows on those who put their entire trust and faith in Him Alone. 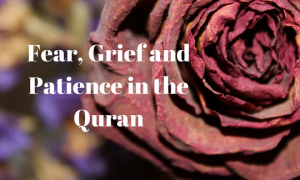 Fatima Altaf
I am a Clinical Psychologist, Writer/Blogger and Iqbal Studies researcher originally from Pakistan, residing in the UAE. My writings regularly get published in different news and media websites. My interests include Psychology, Islamic Philosophy and scientific
research.