My experience as a child

Since I was a child, at Kindergarten age as far as I can remember, my Dad made it a habit for our family to pray Fajr and Maghrib in congregation together at home. As small children my siblings and I were taught to join the congregation led by my Dad. So even though our prayer movements were not perfect yet, we understood from an early age what prayers were about and what the manners for congregational prayers were. Later on, when we were at our elementary school years, our extended family usually had a weekly gathering to pray congregational taraweeh together during Ramadhan. My siblings and I usually joined the congregational taraweeh prayer alongside the adults. As children, we were just told to join as far as we were able and could rest quietly when we were tired. In comparison to other children, we were calmer and tamer during taraweeh congregational prayer, because we were used to daily congregational prayer at home, plus our parents had given us proper direction and explanation. However, we were still children and would also occasionally got caught up in playing with other children, making loud noises, etc. Fortunately, there were always adults who would supervise us, and reminded us gently to be quiet and to listen to the Khutba. So gradually and naturally we learnt with other children the proper manner in such congregations.

In my home country, little children are commonly found sitting or running around during congregational prayers in mosques and other gatherings. The parents and other people let them be because the main reason to bring the children to the mosque was to naturally attach their hearts to the mosque and familiarise them with Islamic rituals. Children are also commonly present in sermons and other informal classes. Their presence is not discouraged, and they are usually not seen as a distraction. For example, when a baby cried during a class, and the baby’s mother rushed to get the baby out of the room, the high-profile speaker told her to stay with the baby in the class instead and did not mind that the baby was crying. The talk continued, and everybody was listening attentively to the speaker who seemingly did not lose his train of thought while the baby was crying from time to time. It is also not uncommon to hear babies crying during congregational prayers such as taraweeh. Nobody protested and most people appreciate the mother’s effort to attend taraweeh prayers despite being busy with her baby child.  When the children become older, they usually join the prayers in the prayer row. My nieces and nephews imitated our prayer movements since they were toddlers and they frequently request to join us in prayers without us asking them to. They frequently followed my Dad to a nearby mosque, sit in prayer line, and imitate the prayer. They then learnt proper prayer procedures later at school.

Only when I lived in the west did I realise that it is not always the same in other Muslim communities. I witnessed with shock how in Islamic gatherings, mothers were blamed and reprimanded for their loud children in public and both mother and children were repeatedly asked to leave the room. This might be usual and even the norm for some communities, but for me it took some time getting used to. On the other hand, in these communities a special room for mothers and children are usually provided whenever possible, and during taraweeh congregational prayer, child-minding services may also be provided. Well, different communities may have different preferences in introducing enjoyable experience in religious activities for children. A different arrangement for each community is fair enough as long as it results in a positive experience for the children, leaves a lasting positive impression on them, and attaches their hearts to the mosque, the community, and the Islamic tradition.

To instil fondness of the Islamic tradition in children, and to provide them with positive experience especially during congregational taraweeh prayer in Ramadhan, there are several points I would like to suggest:

So, these are some suggestions for better children experience in taraweeh congregational prayers. Do you have other experiences, observations, and suggestions that you would like to share as well? 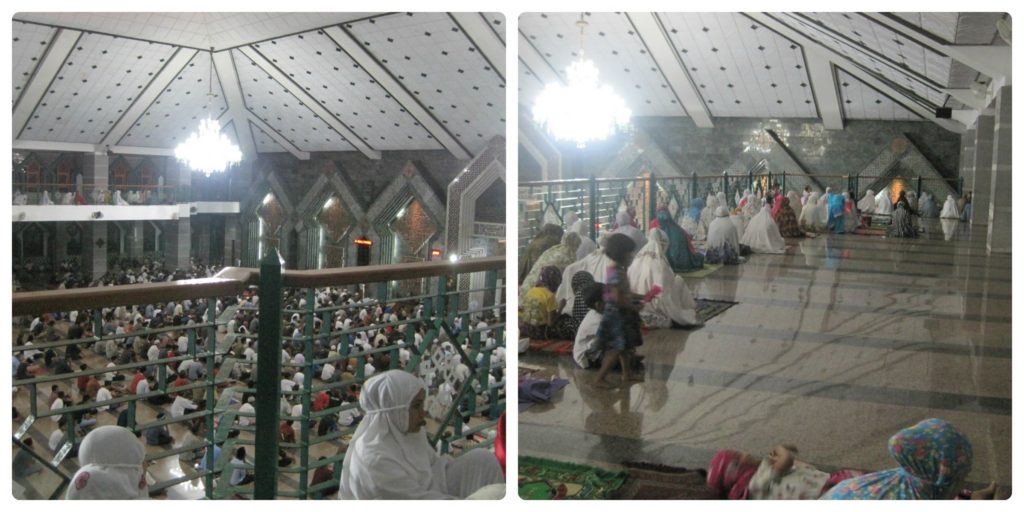 Children during congregational taraweeh prayer in women’s section in one of the mosques in Makassar, Indonesia.

AussiePursuit is an Indonesian Muslima currently a PhD Candidate in Biomedical Engineering at an Australian university. She has three nieces and five nephews whom she loves to watch growing. She volunteered during Ramadan at the university musalla last year where she experienced firsthand the challenges of creating a space and a positive experience for children during religious activities such as congregational prayers during Ramadan. You can find her blog here.

The Last 10 Nights of Ramadan